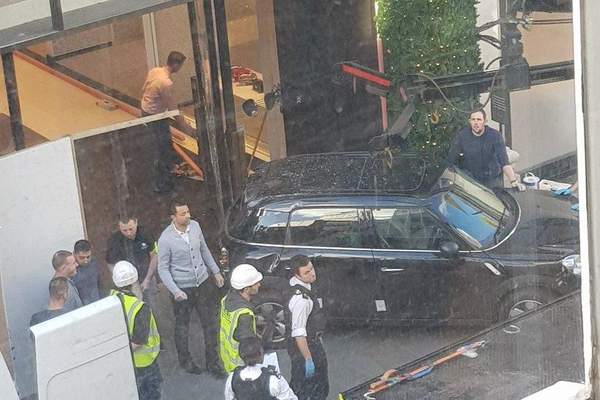 A Security Guard was hailed a hero after attempting to single-handedly stop the plans of an armed smash and grab gang earlier this week.

The gang used a VW Gold and a Mini to smash into the London Selfridges with the intent to then steal designer handbags worth thousands of pounds, however a guard ran towards the Golf wielding a wet floor sign in an attempt to scare off the gang of raiders.

CCTV footage shows the guard diving out of the way of the vehicle at around 4am on 13th November. A colleague of the guard has stated that “He tried to stop them with a “caution wet floor” sign. He came running with that, and with his hand in the air thinking he was going to scare them off. His legs didn’t get broken or anything but he got knocked by the car. It tripped him over and then they drove off.”

Another Guard added “It sounded like a James Bond movie scene. The security guard was a hero. We are thankful because the robbers had knives and all that, but he wasn’t hurt.”

Of the cars used in the raid, the Mini was abandoned at the scene as the gang made off with tens of thousands of pounds of luxury goods.

Detective Tom Alyward from Westminister Police has spoken, stating: “Thankfully nobody was injured. I’d like to appeal for those who may have been in the area at the time and saw the individuals involved, either at the scene or fleeing, to get in touch with police and send us any images and footage that they may have”

A Selfridges spokesman has said that nobody was injured and that police are investigating the incident.