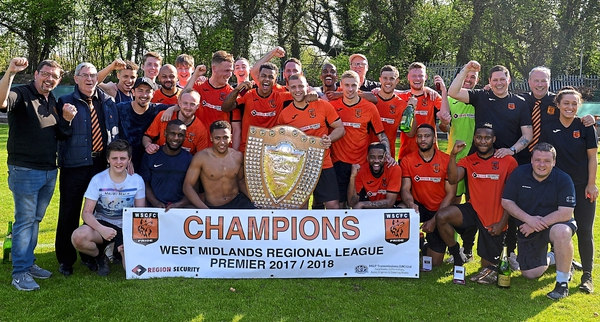 Sporting were handed the prize on Saturday, having earlier blasted through the 100-point barrier courtesy of a 3-0 win over Malvern Town.

Strikes from Tom Hill, Dan Scragg and a Jamie Sauntson own goal for the visitors got the party started as the hosts celebrated a superb campaign which will finish with them at least 15 points clear at the top of the table.

The result meant Sporting finished the season having won 34 of their 38 league fixtures, scoring an incredible 148 goals in the process. It was also their 18th straight win in an unbeaten run which now stretches for 21 matches

Sporting’s success is made all the more impressive by the congested nature of the fixture list they and others have had to negotiate, during a campaign wracked by bad weather.

Neither is their business finished yet. Paddock’s men face Brocton in a JW Hunt Cup quarter-final tomorrow night, before travelling to Cradley Town for a League Cup semi-final on Saturday.

Plans for next season in the Midland League Premier will not begin in earnest until the campaign is complete.

We at Region Security Guarding will also continue our sponsorship deal into the next season.